Amalia, the daughter of Rachel and Zeev Greenberg was born January 1st, 1927 in suburban Boryslaw. Her parents were merchants. She had an older brother, Wilek and a younger brother, Abraham, who perished in the Shoah.
Amalia survived the Holocaust in the Boryslaw ghetto and was able to work. Later she hid in a bunker with 10 others. The bunker was built by the Jewish lawyer Machanizki, who impersonated a Pole.
After the war Amalia studied nursing and worked in her profession in Poland.
Amalia met and married Ephraim Bassiuk. They had two children Rachel and her younger brother, Mark, died at the age of 3 months of a heart defect. The family immigrated to Israel via Italy in 1957 and settled in Haifa. They were joined by Amalia’s brother, Wilek and her uncle, Lonek. Amalia worked many years at the eye department of Kupat Holim.
Her daughter, Rachel had two children: Orli and Nir. Rachel was diagnosed with cancer in 1996 and passed away at the beginning of 1999.
Amalia passed away in Haifa on May 5th, 2017 at the age of 90. 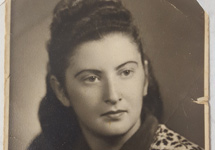