Submitted by Baruch and Dr Ariel Weissman, Herzeliya and Ginaton

Submitted by her husband Harry Smith, Sydney, Australia and her cousins: Baruch and Prof. Ariel Weissman – Hezeliya and Ginaton towards our Annual Memorial Meeting, remembering those who passed away in 2019 – 2020. The meeting was held via Zoom on December 24th, 2020.

Dina was the daughter of Janina Han and Dr. Szechna Weissman, a renown surgeon from Drohobycz. Dina was born in Wroclaw on April 30th, 1946 and passed away August 26th, 2019 in Sydney, Australia. When Dina was three years old, the family made aliya and settled in Kiryat Yam where she attended elementary school. Before she started high school, the family moved to Neve Sha’anan in Haifa. After graduating from the “Hugim” school Dina joined the army. After completing her military service, she moved to Jerusalem to study languages. After graduation, Dina moved to New York where she worked as a secretary in an art gallery. When she returned to Israel, she became the secretary of the Artists Union in Haifa.
In the 1970s she started working at the Technion where she met Harry. The couple married in 1973 at the Technion synagogue. The couple had two children – Roy and Karen.
In the 1980s they traveled to Africa – to the Ivory Coast and Cameroon where Harry worked as an engineer for Solel-Boneh. Dina taught French and English and was a personal consultant for the agricultural advisor to the president. In addition, Dina painted and had several exhibitions.
In 1993, the family moved to Sydney, Australia. Dina worked as a translator for SBS – a TV and radio organization that also imported movies in various languages from around the world, including Hebrew. In addition, Dina taught Hebrew in a high school. She also volunteered to assist an Aboriginal Sydney council member.
Dina is survived by her husband, two children, her son-in-law and four grandchildren.
May her memory be blessed, 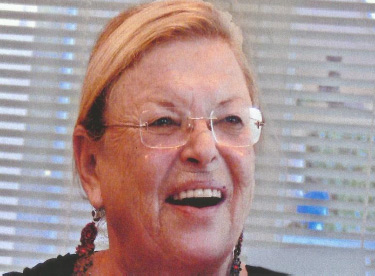