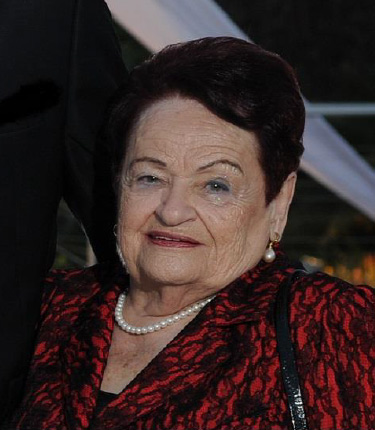 Submitted by their daughter Tova David, Kfar Saba towards our Annual Memorial Meeting,
remembering those who passed away in 2019 – 2020. The meeting was held via Zoom on December24 th , 2020.
Ella Hendler (Einsiedler)
Ella, the daughter of Bernard Dov and Dora was born on June 10 th , 1929 in Boryslaw and passed away on
May 10 th , 2020 in Israel.
Her mother Dora was a devoted family woman. Her father Dov worked in oil drilling and was considered
an expert in his field.
At the outbreak of World War II, Ella was 10 years old, finishing third grade in a Polish elementary school.
With the German occupation in 1941, Ella's father, Dov, started doing business. He bought wheat from a
flour mill, her mother baked bread in their house which then both of them were selling. Later, the family
wandered from place to place. They hid, split and found solutions each time something happened. From one labor camp to another, escaping to hiding places with virtous people. Her father Dov moved the family from place to place and thus saved their lives countless times.
Towards the end of 1944, the family, incl. Ella, her parents, and her brother Manek, came out of hiding
and tried moving back towards their home. Apathetic, destitute, barely dressed, but alive, all thanks to
her heroic father. They stayed in Boryslaw for about a year, moved to Poland, then to Prague in the
Czech Republic, and from there crossed on foot towards Germany. They went by train to Munich, and from there they were transferred to a DP camp, Foehrenwald. Ella and her brother Manek went back to school and the family was getting slowly to some normalcy.
Ella went through the Holocaust surrounded by a strong family that survived the inferno. With Dad initiating and responding, the heroic gatekeeper of his family.
In Foehrenwald, Ella met her future husband, Moshe. Moshe lost his entire family in the Holocaust. The
two fell in love and married in 1948.
In 1949, Ella, Moshe and the family made Aliyah.
Ella worked at home. Moshe worked in the Haifa port, played and coached soccer games.
In Israel, Ella and Moshe had 2 children and 12 wonderful grandchildren who grew up alongside a loving
and giving Grandmother. A family woman and an anchor to those around her, she took great care of her
parents and her late brother Manek, her children, grandchildren and great grandchildren.
Grandma in the full sense of the word. Ella who was a seamstress, a hairdresser, a cook, opinionated
and a real “Polaniya”.

Ella and Moshe enjoyed life, and lived a full and happy life alongside the extended family that continued
to grow. They loved people and company. They played cards, danced, loved to go to the beach,
entertain and greatly assisted new immigrants in their absorption in the country.
In December 2019, Moshe died at the age of 96. Ella who could not bear the pain and loss and died four
and a half months later.
May her memory be for a blessing.

Interview with Ula Hendler
Moshe Hendler
Moshe, the youngest of seven children was the son of Mendel and Gita. He was born in Boryslaw on
October 17 th , 1923 and passed away in Israel on December 27 th , 2019. His father Mendel worked in the
oil industry.
The young Moshe stood out in soccer, with his rare playing talent and his powerful left foot. His brothers
came to see him play.
At the outbreak of World War II, Moshe was 15. In the first pogrom against the Jews, carried out by the
Ukrainians his brother Michael was killed.
After the German invasion in 1941, his brother Joseph and his sister Etka were shot in the killing field in
town. Upon the final liquidation of the ghetto, Moshe Handler was sent to the Koszary labor camp in
town. From the Koszary, he was transferred to Plaszow near Krakow, where he worked in a quarry. He
was then transferred to St. Valentin and began working in a weapons factory. Each crossing, every train
ride, was accompanied by the terrible fear that it was now his turn to die.
Moshe Hendler survived the Holocaust - a 21-year-old man who was skin and bones and weighed 40 kg.
Two years later he met with his brother Mordechai who returned from Russia.
At the end of the war when he became himself again, Moshe returned to play soccer in the liberated
camp. He caught the eyes of men of the Bayern Munich team (the most glorious soccer team in German
history) who offered him a big contract. Moshe refused because: "I did not want to play with Germans. I
was afraid of them."
Moshe Hendler, a true hero, a Holocaust survivor who established a large and happy family - lived a full
and happy life. A boy who survived the Holocaust at the age of 15 and was left alone without parents
and siblings, Moshe rose from the inferno and met Ella after the war. They married, immigrated to Israel
together and settled in Haifa. They had two children, six grandchildren and 11 great-grandchildren.
A dedicated Haifa port worker, a sensitive and loving family man, greatly assisted new immigrants in
their absorption in the country.
...And a football player at Ha’Poel Haifa, with a left foot that stunned the country in the 1950s. To this
day he is considered the "Legend of Ha’Poel Haifa".
May his memory be for a blessing. 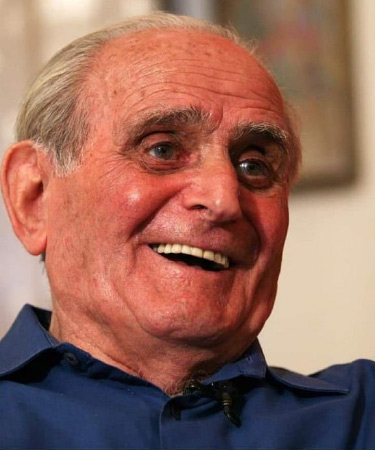