The story of Ilana Wishnitzki-Snir (Brauner)

Ilana (Halina) was born in Drohobycz in 1929 to Yehoshua and Rivka Brauner. She had two brothers Wolf (Zeev) and Hesio and a sister Malka. Her parents and many relatives perished in the Shoah. The family lived in a house surrounded by a large yard where they kept a vegetable garden for their own consumption. The home was traditional. The father, Yehoshua, was a meat merchant.

Ilana completed the 5th grade in a Polish school. In addition to Polish she also studied Ukrainian and German. The parents spoke Yiddish between them and with the children. There were good relations with the non-Jewish neighbors. Ilana remembers “shaygetz” (non-Jewish) children playing on the street and yelling at each other in Yiddish. On Shabbat and holidays a “goy shel shabat” (a non-Jew who performs certain types of work on Shabat) came to light the cooking stove and the lights in the house. A real luxury at the house was a radio gramophone where they could listen to broadcasts from around the world and play music from records.

The older children Malka and Zeev belonged to the youth movements of “Hashomer Hatzair” and “HeHalutz”. Ilana remembers a song that the children used to sing in Yiddish expressing their hope to leave the diaspora in Poland and go to Eretz Israel (translation): “In a year or two we will all go there”.

The Second World War started in September 1939. Drohobycz was occupied by the Germans who immediately started oppressing the Jews, looting their property and kidnapping people for forced labor. Ilana remembers standing on the main road with multitudes of citizens watching a German convoy roaring through town. The people, including Ilana saluted the Germans and yelled “Heil Hitler”.

When she came home she told her mother about the exciting encounter with the German army. The mother, Rivka looked at her sadly and said: “you don’t understand, but you did a very bad thing”.

Following the signing of the Molotov–Ribbentrop Pact, the town passed to the Soviets on September 22nd, 1939. All the Zionist leaders in Drohobycz were arrested, the Jewish schools were closed and many refugees that fled from eastern Poland in hopes of finding safety in town, were deported in the middle of the night by the NKVD to the gulags in Siberia. The non-aggression pact was broken on June 22nd, 1941, and the Germans returned to Drohobycz while the Russian army fled. The Drohobycz ghetto was established in March of 1942 and Ilana and her family moved there. Her sister Malka and her brother Wolf were taken by the Germans for forced labor.

Ilana was a witness to a traumatic event which haunts her to this very day. She was playing with friends in a field close to the forest. A truck carrying many Jews – men, women and children drove by and disappeared into the forest. Shots were heard for a long time from the forest and then the empty truck returned. Ilana ran home scared and told her mother what happened. Rivka Brauner tried to calm down her daughter and said: “This will not happen to us...”.

Ilana continues: “After a week, the Germans came and kidnapped my mother, father and my younger brother Hesio. I came home to find out that everyone disappeared and I never saw them again. I was later told that they were sent to Belzec death camp. I found two cousins younger than me wandering around as they were all alone too and we started looking for food in the ghetto. The younger cousin Salek (Shalom) was 7 years old and the older one was Wolodia. I told Salek: ‘From now on your name is Barbenko. If we are asked we’ll say that you are Ukrainian, your father was killed in the war and your mother works for the Germans. And you, Wolodia are from now on Takciuk. You are Ukrainian too and we are brothers and sister. I was 13 at the time and wanted to live. I said to the kids: ‘I am no longer Halina. From now on my name is Galina Dimitrenko’. We spoke Ukrainian fluently. We fled the ghetto together and left Drohobycz. We evaded the Germans and blended into the local population. Nobody knew us in the villages. People felt sorry for us and from time to time gave us some money and some food.

We wandered aimlessly. We walked a lot, sneaked onto train roofs. Like in a dream I remember passing in places like Tarnow, Dembica and others. When we arrived in the Volhynia region in a village by the name of Bieliczy, people believed our story, did not think we were Jews and took us in. Wolodia and Salek found jobs in the village and worked for food and board.

An old farmer by the name Alexei and his wife agreed to take me in and give me a job and a place to stay. Their three adult children left home, had already families of their own and lived elsewhere. They liked me from the beginning and treated me like their biological daughter. With time I started calling them ‘Mom and Dad’. During the day I helped with the household chores like cooking and cleaning. I watched the cows in the field, fed the pigs and chopped wood for the stove. Slowly I started forgetting my real name. I recited the Christian prayers and attended church with Alexei and his wife and the neighbors never suspected me.

I met my cousins almost every day. They were OK and had enough food. Once Alexei told me to get in the house, hide, not move and be quiet. The underground “Partja Krajowa” people arrived in the village to confiscate food. They were Anti-Semitic and cooperated with the Nazis. They asked if there were any Jews in the village, but the peasants said nothing even though they endangered their and their families’ lives.

Ilana and her two cousins stayed in the village until the area was liberated by the Red army in the summer of 1944. Jews that were hiding in the villages started to come out, but hesitantly and fearfully. It was a known fact that anti-Semitic Ukrainians were as dangerous as the Germans.

In 1945 Ilana moved to Sambor, where she found a job in the railroad administration as a housemother at the railway workers’ welfare facility. All those years she did not reveal her Jewish identity. She kept in touch with Alexei and his wife. Since she reached adulthood they started pressuring her to live as a Christian, get married, start a family and come live near them.

In 1949 Ilana returned to her hometown of Drohobycz. She lived for a few months in a protected Jewish hostel established by a refugee name Yoshka. The hostel provided shelter, assistance, and information for survivors and refugees returning from Russia. Among those who stayed in the hostel was Josef Wishnitzki who was born in 1917 in Chmielnik, Poland. He served in the red army during the war, fought against the Germans and was decorated for bravery. Josef opened a tailoring workshop with partners and worked mainly on orders for the army.

Ilana and Josef married at the beginning of 1949 and their oldest son Sasha was born at the end of that year. Their second son, Yoram was born in 1953.
They maintained their Polish citizenship and in 1957 they decided to return to Poland. On the same year their application to immigrate to Israel was approved.
Cousin Wolodia got married in Ukraine and settled there. Cousin Shalom immigrated to the US and settled in Brooklyn.

Ilana and Josef immigrated to Israel and lived at first in Nof-Yam. Later they moved to Herzliya and purchased an apartment there. Josef worked as a cook in the “Hasharon” hotel in town. Ilana who was always very independent and who from a young age could rely only on herself, was looking for a profession allowing her to express her personality. She trained as a hair stylist and eventually opened her own salon which increased the family income and improved their standard of living.

Over the years, she discovered a talent for painting. Dozens of beautiful watercolors and oil paintings, adorn the walls of her apartment, a source of pleasure for her and her family. One of the paintings - of a green field at the edge of the Bronica forest where she was a witness to the mass murder of Drohobycz Jews still haunts her to this day.

Ilana’s and Josef’s oldest son Sasha died in 1959 at the age of 10 after he contracted polio. A year later, Ilana gave birth to their youngest child – Rina.
Ilana and Josef had six grandchildren: Nadav, Liron and Shai (Yoram’s children) and Moran, Or and Ron (Rina’s children). Josef passed away in 1997. Ilana never really retired. Even at the age of 80 she still enjoys being at her hair salon. For a while she volunteered to help the elderly. These days her entire world is the family and the grandchildren. 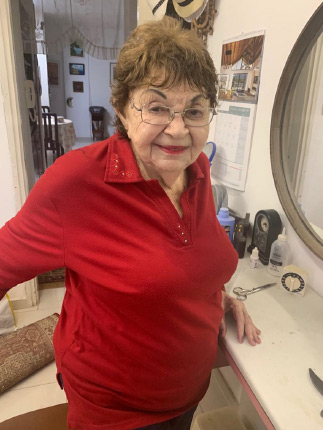