A Story of Life and Death: The Holocaust in Drohobycz and Boryslaw 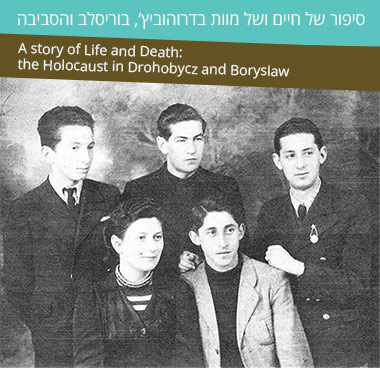 Drohobycz and Boryslaw were home to remarkable Jewish communities for centuries. Despite their relatively small population, some distinctive people of letters and culture, such as the writer Bruno Schulz, painters Efrain Lillian, Maurizio and Leopold Gottlieb, political and economic leaders such as Leon Reich, David Horowitz and Prof. Shevah Weiss hailed from these communities. Since the 19th century, Jews from both towns have been involved in pioneering, establishing and managing a unique era in modern oil industry.

Prior to the Holocaust some 32,000 Jews lived in the Drohobycz district. By the end of World War II, only 400 Jews survived in Drohobycz and 200 in Boryslaw. Acts of rescue during the Holocaust in Drohobycz and Boryslaw included some exceptionally courageous people, Jewish, German, Polish and Ukrainian, who remained human in unhuman times.

The Organization of Drohobycz, Boryslaw and Vicinity Survivors (Israel) in conjunction with the ASF Workgroup (Germany) launched a series of events and exhibitions in Israel, Poland, Ukraine and Germany highlighting Drohobycz and Boryslaw before and during the Holocaust.