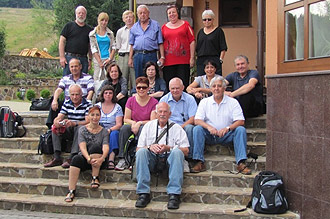 The travelers paced in the market square where their parents and grandparents marched, went into Synagogues they prayed in and saw their cemeteries or what is left of them, in which the extensive community was buried. The journey included a visit to our heritage sites, including the "Bruno Shultz" Museum in Drohobycz, victims of the community monuments and labor camps. In Lvov they visited the "Galician Jews Legacy" exhibition, "Hessed" center, the Jewish hospital, Janowska labor camp and more.
The travelers held moving memorial ceremonies at both the mass graves in the forests and at the memorial monuments. The stories of each group member gave contributed to the emotional atmosphere and reinforced the special bonds that were formed within the group members. First generation member, Shmuel Milek Wachtel, who lives in Schodnica told of his life previous to the war, his struggle to survive during the war and his life in Israel, which added a deep meaning to the journey.

All members of the delegacy unanimously recommend to the members of the organization, to join the planned upcoming journeys in order to follow the past footsteps and to be moved by a journey which connects us directly to our parents' home, to our peoples' fate and to our heritage.

This journey was impressively organized by our friend Ronit Halperin and for that we are much obliged.