On the 75th anniversary of the Nazi occupation of Drohobycz, Boryslaw and Galicia our exhibition will be opening at Beit Beit Hatfutsot.

The exhibition deals with the unique story of the Jewish communities of the two towns and the surrounding villages, their involvement in the oil industry and its influence on their life and the Holocaust.

This is a travelling exhibition. It has been shown in Wroclaw, Poland, it then carried on to the memorial museum in the Belzec Concentration camp and from there to Walbrzych and Dzierżoniów. In Germany the exhibition is on view in Cologne since January 2016.

In Boryslaw the exhibition was shown in the municipal museum and in Drohobycz it is planned to open in June at the newly refurbished Great Synagogue.

This is a must-see for all our families.


Our exhibition - A STORY OF DESTRUCTION AND SURVIVAL, THE HOLOCAUST IN THE GALICIAN OILBELT opened on July 17, 2015, in the BORYSLAW Municipal Museum.
This exhibition tells in English and Ukrainian, the story of our families who perished during the holocaust and those who miraculously survived. It will travel to Drohobycz later on this year. The exhibition opened in Wroclaw earlier this year in English and Polish, and will travel to Belzec at the end of this month.

As part of the opening ceremonies, a commemorative plaque has been placed in the former Beskiden Oil headquarters in Boryslaw to honor Berthold and Elsa Beitz, who personally saved hundreds of Boryslaw and Drohobycz Jews during the Holocaust. 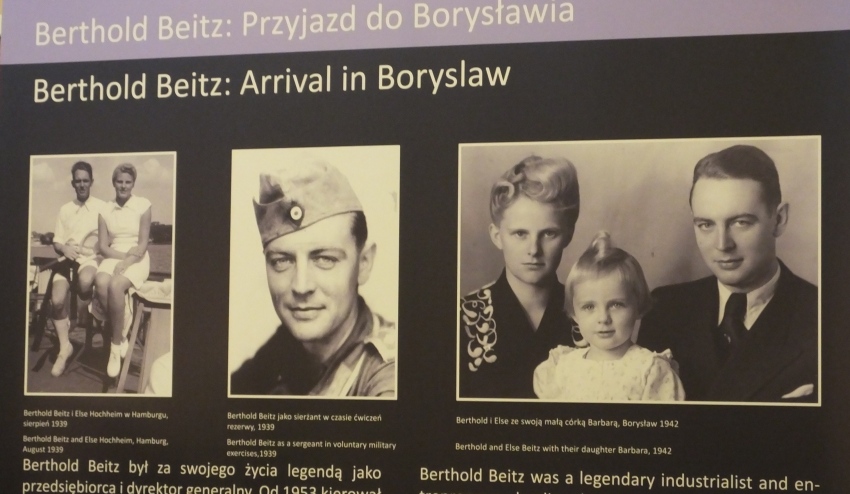 At 31'st July 2015 the exhibition eas opened in Belzec Museum and it will stay open till the end of September.
Our friend Ronit Alperin was there with her husband and son. Please see Pictures and Ronit's speech